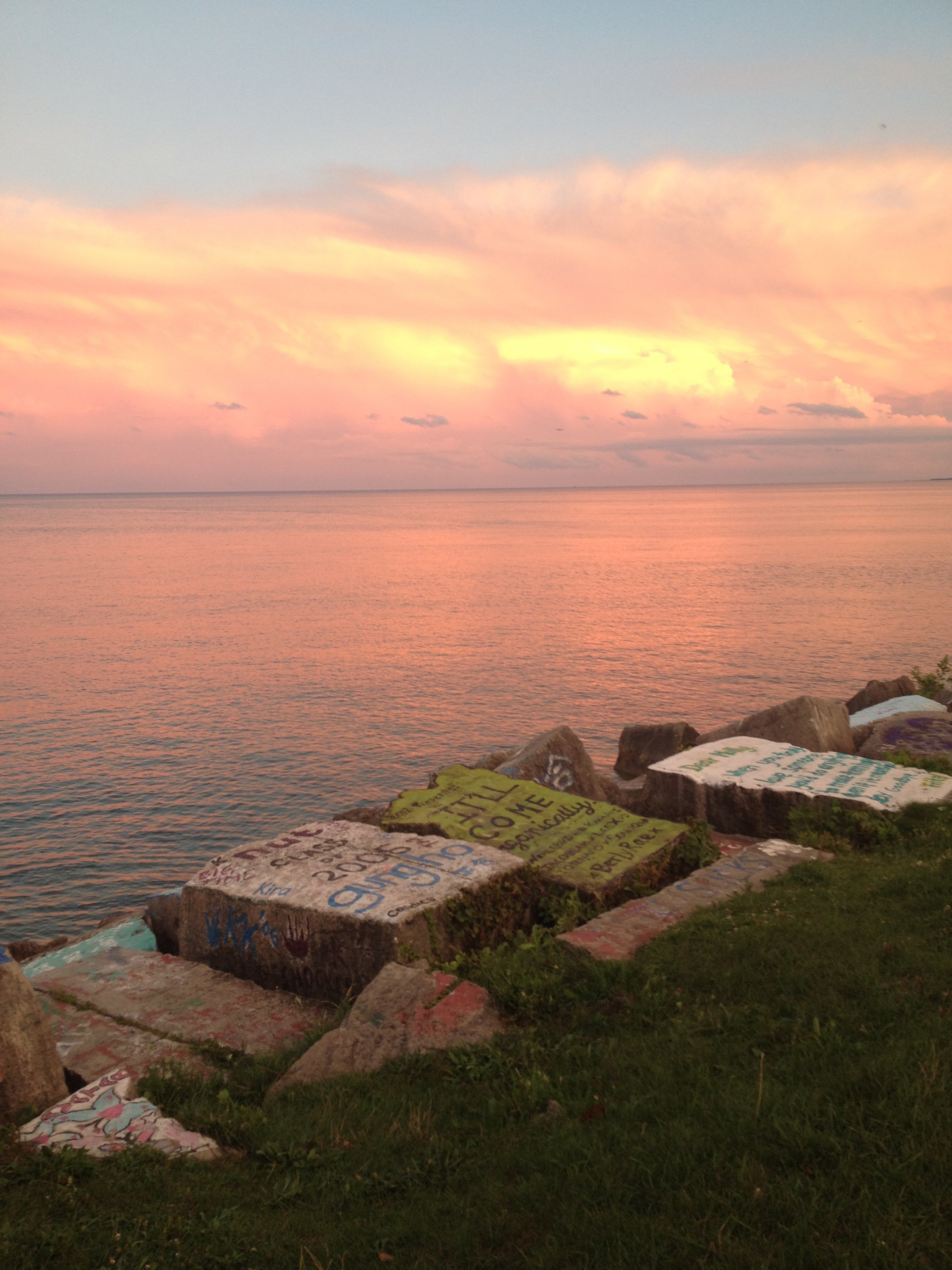 When I was eighteen and pregnant, I went to my sister’s house for a long two week stay. It was reckoning time, time to make decisions about what I was going to do with the baby, what I was going to do with myself, and how I was going to steer my life after the impending birth. On my second day there, my sister dropped me off at the bookstore and I bought a journal. [Incidentally, this was the occasion on which I bought my first ever feminist book.] I made my first entry on August 2nd, 1999, a mere six weeks before Ethan was born, an entry that started with confusion and ended with a list.

My pregancy, obviously, was a major turning point in my life. Within the span of a year, I got pregnant, became homeless, graduated high school, started community college, became a mother, and (after a short reconciliation which moved me back home with my parents) moved in with a man that everyone except me wanted me to marry. My life was so dizzying and awful during this time that I spiraled into a deep depression and developed an eating disorder. Every night I retreated to the back porch of the apartment to smoke cigarettes, listened to the upstairs neighbors get drunk and fuck while my newborn baby slept indoors, while my babydaddy did his best to pretend he was somewhere else with someone else, and wrote in the journal.

It’s not a happy thing to page through, but sometimes I drag it out and reread it to remind myself where I’ve been, remembering the sad sympathy I must have felt a year after the thing had been abandoned, when I went through and scratched out all the unflattering things I wrote about Ethan’s father only because Ethan might someday find it. The journal is an artifact from the most desperate time of my life, an exercise in despair. But the thing I always turn back to is that list.

The reason why is taboo and scary for me, especially as someone whose life is so shaped by the addition of a child at such a seminal moment in her life. Because we’d just decided that my pregnancy would end with adoption. We contacted adoption lawyers and began to meet with prospective parents. And so in this first entry I wrote:

The best opportunity I can give as a parent are better parents. People who are prepared and will feel blessed. A couple who are together in love – a stay-at-home mom, good income, maybe some pets, extended family. Read a lot, will encourage and appreciate art and music, open to individualism, and willing to do ANYTHING for my baby. Parents who will love parenting and are ready to turn their lives over to such a small, independent creature.

As for me, I will do the best I can to piece my life back together. I will start with classes at community college, maybe learn to wait tables. Transfer to Purdue. Start treating myself right. Educate myself. Feel good about the choices I make. Grow my hair long. Go out in public in a bathing suit. Start running. Stop being so embarassed. Stop wondering what everyone else thinks. Stop trying to impress others.

I want to surprise myself with how successful I can be.

I was so sick and sad then, embarrassed that I’d “turned up” pregnant and disappointed my family and friends. I kept my goals small (grow my hair long, wait tables) because I felt small. My future looked small. The list was a gesture toward hope when everything looked hopeless, and the biggest hope I could offer myself was potentially going to college. I didn’t even offer myself the hope of graduating.

Eventually, after a year of fighting with the babydaddy and realizing that this mythical family I was trying to assemble was not going to and would never happen, Ethan and I moved back in with my parents. I was so crushed that I endured a week-long crying jag and my mother feared I wouldn’t recover from it. At some point I brushed myself off, applied for and was accepted at the local university. I started classes. Acting on the tip of a friend, I secured a job at a local pizza joint as a waitress and spent my nights listening to my coworkers talk about their drunken escapades, realizing I wasn’t missing anything. I came home at night and read my textbook assignments, wrote paper after paper, and started something called a blog. Every night, at Ethan’s request, I’d scoop him up in my arms and we would dance, and dance, and dance, to his favorite song. I was shocked when my first progress report put me on the dean’s list.

Time passed. There was a long, ugly custody battle. I won. Ethan and I moved out on our own. I dated a little and had my first relationship since the split and discovered that some relationships can heal. We moved again. I kept my grades up. I broke up with my boyfriend, discovered that some of my friends just weren’t friends, and endured a year of funerals that resulted in six friends, family members, and acquaintances, gone all for unbearable reasons. I begged my parents for money. I blogged for money, I worked for money, I scammed for money. I dreamt about money. Sometimes we skated by on nothing.

And sometimes life was shitty. But mostly it was good.

The journal resurfaced when I moved into this house, and I was a little proud at reading the list. With the exception of graduating from college — an academic goal I finally achieved six years later in December of ‘05 — I’d done all the things I’d listed and then some. But it was only today, when I found the journal again, that I realized something else.

Somewhere along the way, I became the parent I wanted for Ethan. Strip away the 1950’s ideal that typified the family life I pictured when I felt so helpless, strip away the myth of parental preparedness, and it’s clear that what I wanted for Ethan was me, but stable. I do feel blessed as a parent, I didn’t have steady income but I made income somehow. I have a huge extended family that adores and cares for Ethan daily. We read so much that we can’t keep up with what we read, and we’re always making art and music and food, and enjoying a song or a movie, cuddled up on our raggedy couch enjoying one another’s company. I did turn my life over to Ethan’s best interests, and in this context, in this place, we are all the better for it. This is enough.***

And yet sometimes it isn’t. I started this blog eight months after graduation and promptly began writing about my financial troubles. I was working three jobs after a brief period of unemployment (Indiana coughed), and trying to hold onto the one I have today so I could secure medical benefits because I was sick all the time. Meanwhile the Femblog Class Wars of ‘07 were raging abound, and I read in horror as people erected moral pedestals for themselves to sit on, thinking, LET ME KEEP MY GOT DAMN LIPSTICK! IT IS ALL I HAVE!

So I held onto my lipstick, damn it, and concentrated on keeping my head down and getting shit done. I was struggling, whoever sets the bar kept moving the bar, and in my confusion and feelings of failure I forgot about the small pleasures, and more importantly, how to take pleasure in them. The last two years, despite all the wonderful relationships that have developed with friends and family and coworkers, and all the cool things I’ve been able to see and do, everything good has coexisted with a dull melancholy. The money, the stability, and the freedom from emotional weight that goes with it, may never come to me.

Sew a dress.
Take a sewing class.
Plant a flower garden.
Pay off state college loans (save the federal loans for the next list).
Savings.
Write more.
Write a short story.
Write a book, even if no one will publish it.
Eat fish.
Call your friends more.
Remember birthdays.
Write someone a thank you note for nothing.
Learn to play upright bass.
Learn to play the guitar.
Record one song.
Maybe even sing on it.
Take a road trip.
Read more.
Get up earlier.
Go camping. In a tent.
Learn to cook a dish better than a restaurant.
Throw a dinner party.
Learn how to talk about wine.
Volunteer.
Work for a non-profit.
Teach.