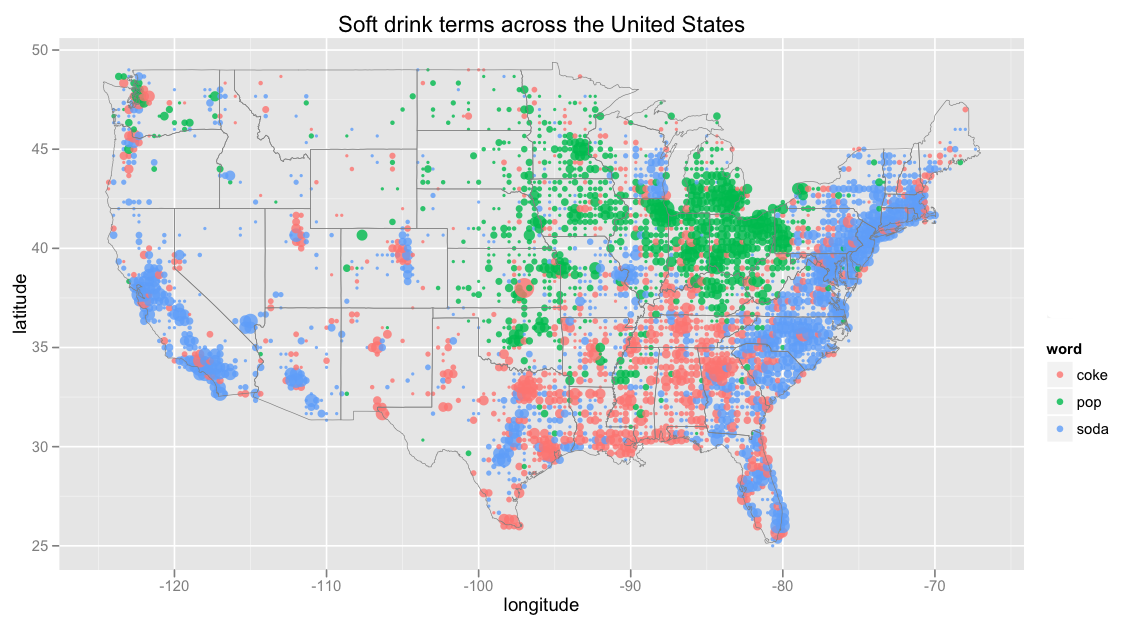 Attached is the latest play on the soda vs. pop maps that clutter up your Facebook wall.  The point of the exercise is less about how we name our food and more about how to use technology to map geographic variations, in this case tracking a language variation related to a common household purchase on Twitter. (Speaking of which, are you following us on Twitter yet?) Regardless of the whys and hows, it’s fun to see how we chart relative to the rest of the country.

Twitter data scientist Edward Chen mapped out tweets that used either “coke,” “soda,” or “pop” when describing a soft drink.  The red on the map shows places where “coke” is more prevalently tweeted, green indicates “pop,” and blue is for “soda.”

As the child of Southern transplants, I grew up in a “coke” household and always found all the “soda” and “pop” families (especially the “pop” families) kind of strange. As an adult, I’m one of those weirdos that likes the Victorian formality of “soda,” or like New Englanders, “tonic.”

As it turns out, the map linked above demonstrates that the Lafayette area is a solid “pop” area, though our immediate rural neighbors are “coke” folks. You’ll also notice that this string of “coke” people in Indiana is right at the top of a large triangle of other “coke” people throughout the southern Mississippi Valley and the western half of the antebellum South.  The Midwest is largely populated by “pop” people except for a heavy population of “soda” folks in southeast Wisconsin and southern Illinois. “Soda” folks are otherwise members of the coastal elite.

What does this say about cultural patterns, how language migrates through geography, and how our technology transmits culture?

MEANWHILE, Bon Appetit magazine, one of the premiere glossies for foodies, is declaring that “Soda Fountains are back!” (There with the “soda” again!) Foodie blogs discussing one of the newest beverage trends, pairing food with “soft drinks,” drinks without liquor, in place of traditional “hard drinks,” or drinks with liquor. This isn’t what we typically think of when we talk soft drinks — think more along the lines of lemongrass or ginger flavored syrups in carbonated water as opposed to Mountain Dew and Dr. Pepper. Think artisan ginger ale or pomegranate fizz. In the GLA, though we don’t have a high-end market (yet!) for carbonated soft drinks, McCord’s Candies offers an old school soda fountain atmosphere, complete with lunch counter and nostalgic handmade candies. A little way up the Main Street hill by Columbian Park, you can hit the Original Frozen Custard and get yourself an old fashioned soda and hang out after spending the afternoon at the pool.

People who are competitive about arbitrary subjects (SODA! SODA!) can argue this one out. But me? I’ll be sipping my Tiger’s Blood in the shade.