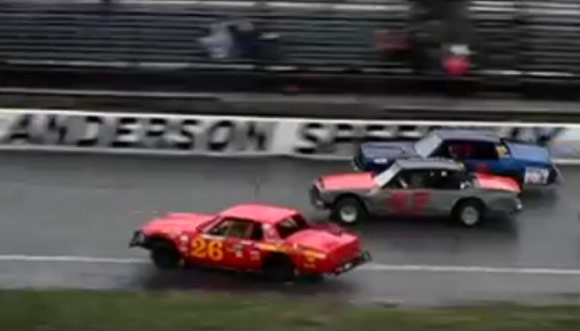 HBO usually has a variety of great documentaries every month, and this month the one that caught my eye just happened to take place in Anderson, Indiana, a very blue collar area within an hour of my home. Anderson, like many manufacturing towns in the Midwest, is steadily heading towards the likes of Flint, Michigan: struggling, dying, devastated, hanging on. But like many Midwestern areas, if you ask Anderson’s residents, they’re struggling but on the up-and-up, aiming to be positive despite the loss of jobs, staying afloat by focusing on family and other interests.

“Dirty Driving: Thundercars of Indiana” is about the struggling Midwestern middle class and the hobbies that take the place of work and career when industry dies, in this case the individual innovation that is a forefront in Indiana’s racing culture. When the auto manufacturing plants that pumped small towns full of money up and left, they also left behind the driving culture that so infects the workers that once populated their lines. In “Dirty Driving,” laid-off workers and their car-fanatic families remove all their ambitions from job and career and put all their knowledge and passion for the industry into their junk cars to race at the Anderson Speedway, talking shit and fighting over their victories and losses as the cameras roll.

This is a slice of a particular regional class culture.  If you read audience commentary on the film, a lot of locals do what they can to separate themselves from the documentary. To your average white-collar folks, these are some rough people that in many ways amp up the Larry the Cable Guy stereotype. There’s no shame in it, I know it and in some ways am of it, and it is what it is. Some of the quotes I might take from the movie are outright ridiculous, yet the director doesn’t take on the mocking eye of, say, Michael Moore. He genuinely respects the subjects’ need for escapist entertainment, and moreover, respects the kind of time and innovation the subjects put into their cars. 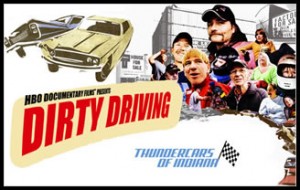 Family overwhelmingly takes the forefront in this picture, even before the problematic economic and industrial issues presented. Each hero in the film is part of a larger familial unit that stands behind and supports them. From Alice Riall, the “oldest grandmother in the Thundercar division” who has a chance at winning first place this season, to Wild Willie Coffman, whose arm was mangled in a motorcycle accident and drives one-handed in vehicles modified for him to maximize the use of his mobile arm, the backdrop is the family unit whose time and economic resources are fully invested in the dream of the Winner’s Circle.

…which is exactly what struck me as a lifelong resident with a love-hate relationship with Indiana. When people can’t make their success by paycheck, they make it elsewhere, sinking their wide array of trade knowledge into another avenue that is often exclusive to white, able, heterosexual men. But not always. The redneck pride, the sexism, the racism, exists alongside respect for women and people of color who are active within the subculture. The men in the documentary, for example, despite calling one another pussies who can’t drive, have no compunctions about their daughters, wives, and mothers learning the trade and actively encourage their participation. Sometimes it’s a mindfuck to participate in this kind of local subculture, to be accepted and reviled at the same time. But by God, they’re Family, people say, and where we come from these are big steps in small measures. We know this is small fries by metropolitan measures, but liberal progress in rural areas is measured by those on the racetrack, in the office, the kitchen, and the factory, who see people of whatever color, gender, and ability as people who have your back in the workplace, the bar, and the home.

On a personal note, the one social measure that hit home for me was one that hit the pocketbook. One of the major sponsors for the race cars featured on the Anderson Raceway was my employer, a small regional company that was taken over by a major national corporation earlier this year. Just this Friday, twenty of my fellow employees were laid off, people whose names were represented on the windshields of these cars as recent as 2007, when the movie was filmed. The new company that takes its place is unlikely to show the kind of regional pride that led to the sponsorship of these racers and contributed to their ability to stay on the racetrack.

This is a look at what happens when your opportunity fades and you’re left with what you know, even if that’s just a hobby, and a six-foot, plastic trophy takes the place of your medical insurance because that’s all you’ve got. So yes, this is a sports documentary without any direct link to mainstream feminist issues, but if you are interested in worker’s rights, micro-level examinations of the economy, or obviously NASCAR-style racing, this one’s for you.