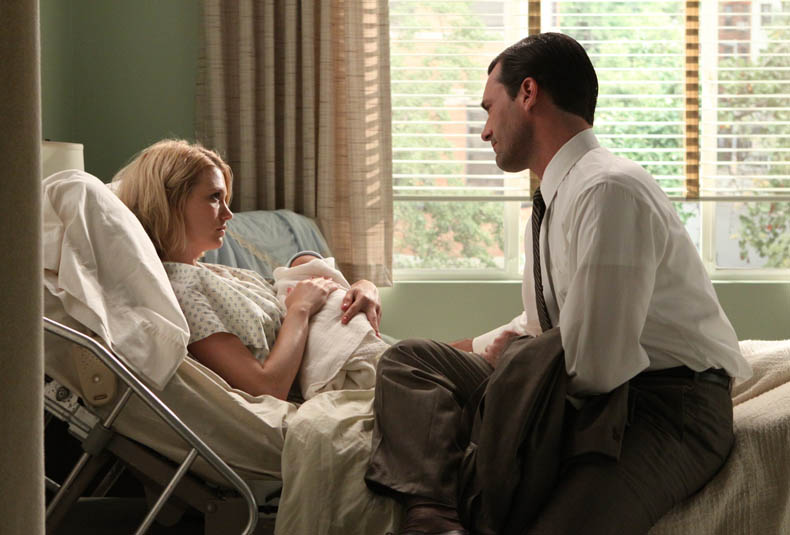 Let’s do some Childbirth 101: As Betty is depicted, fifty years ago it was common for women to be given a drug that would induce “twilight sleep” during a hospital birthing procedure. The amnesic drug did not behave like a true analgesic pain killer, but instead induced a state of disorient that managed pain by making the mother forget the entire process of childbirth. During the procedure, laboring women were, as a matter of course, shackled during regular childbirth.

As Aunt B. wrote last year:

I really thought it was what it sounded like, a light sedation that kept you kind of woozy and pain free while your husband was out in the waiting room passing out cigars and you both waited for the doctor to bring you the news that the baby had been born. And I assumed it fell out of favor because the women couldn’t help push or something.

America, during twilight sleep, women went bat-shit crazy from the drugs and the pain. They hurt their heads (and so women’s heads were wrapped in large gauzy Q-tip looking arrangements). They thrashed around and tried to claw at the doctors and so they were strapped to their gurneys, sometimes for days, in their own piss and shit.

Twilight sleep didn’t suppress pain; it suppressed the memory of pain. So the doctors could just do whatever and the women would not remember it and since it was ‘indecent’ for new fathers to be there, there was no one with the woman to advocate for her. Plus, and this is the part that just creeps me out, they used lamb’s wool on the restraints because it didn’t leave bruises and so the husbands stopped seeing bruises and stopped asking questions about what was being done to their wives.

This method of childbirth completely removed a mother from the birth experience, prevented her from being an agent in her own care, and the necessary isolation prevented the woman’s family from advocating for her while she labored. I spoke to my mom tonight and verified that she gave birth under twilight sleep with my sisters in 1963 and 1969, and she confirmed that you went to the hospital, were put in a delivery room alone, were given a shot, and woke up later with a baby in your arms.

All the exasperated talk about Betty’s helplessness in this episode is defunct — it can not be intended to be part of her overall characterization. Betty, like many women then, was unable to advocate for herself, or enlist anyone else to advocate for her, because she was alone and sedated in the delivery room. This kind of obstetric medicine quite literally rendered women helpless to manage their own minds and bodies.

For shots of the twilight sleep scenes from Mad Men, see the video footage here.