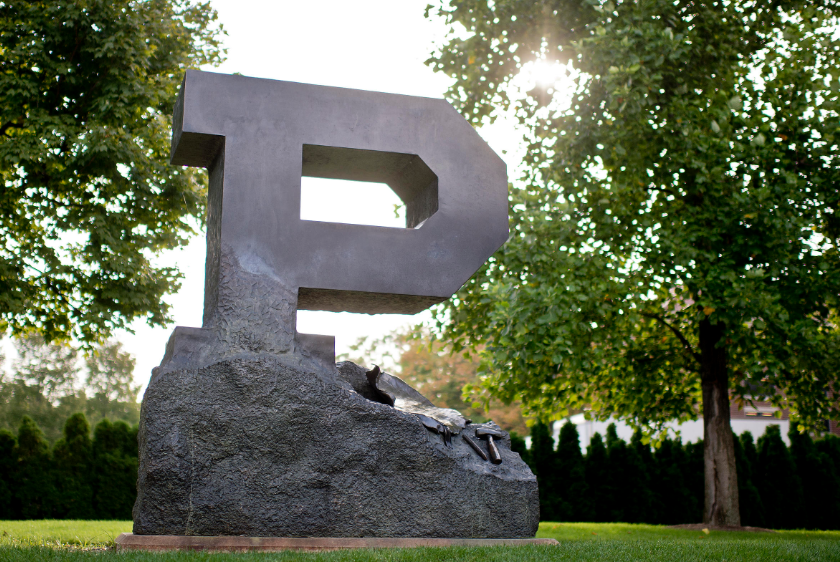 So you want to see Purdue campus? You want to be literate in the highlights of Purdue culture? This is a beginner’s guide to the Purdue University campus in West Lafayette, Indiana. You must see the following, red brick and all.

On a Big Ten campus, there are a plethora of sporting events at any given time. For Purdue sports, start here to see what’s going on in the area at this time. On football and basketball game days, scalpers, last minute tickets, and parking and tailgating are up and down Northwestern Avenue and in the adjoining neighborhood across from Mackey Arena, New Chauncey. On big game days, the bars open early on Saturday, and students come out in costume to drink in excess before the game. This hallowed tradition is called The Breakfast Club. A few years at Purdue, and you won’t think anything of seeing a grown man in a diaper and chaps drunkenly wandering campus with a group of Teletubbies on an October morning. University officials are widely embarrassed of this tradition but locals and alumni tolerate it with a healthy sense of humor.

Von’s is a true independent bookstore, the likes of which seem rare in the days of Amazon. Von’s sells books, new and used, CDs, posters and other popular music ephemera, beads and gifts. There is a little something for everyone. Visitors from out of town often remark that they’ve never been inside an independent book store (yes, really) and consider it a serious destination. The bead selection alone is enough to keep any crafter and jeweler busy for a long while, but bibliophiles will probably be most pleased wandering the stacks. Von’s also has a healthy children’s book section that’s quite magical for little ones. Indie music nerds should also check out their music blog.

You, your kids, and your dog need to run through the fountains in the summertime. The Engineering Fountain is the vertical fountain that illuminates at night, and the Loeb Fountain is the horizontal-spraying fountain outside of the Liberal Arts building. There are a couple of other fountains you probably shouldn’t get in (but don’t let us stop you — you do you).

In the winter, after a good snow, everyone in West Lafayette goes to Slayter Hill to go sledding. While Slayter Hill is also an excellent open-concept concert venue, it’s hands-down the best sledding hill in the area. Try not to sled into oncoming traffic.

Pappy’s in the Purdue Union is a popular diner-style restaurant, decked out in chrome and replete with retro jukeboxes. Eat a burger there. It’s fun, wholesome, and totally appropriate for a date or a family outing. Also, the burgers and shakes are delicious.

Oh, Harry’s. On a Saturday night after a game day, this bar is two floors of drunken students and alumni, shoulder-to-shoulder, singing “Sweet Caroline,” sloshing around mixed drinks and scratching their names into the walls with ink pens. Harry’s is the stuff of local legend with rumors about involvement in liquor-running during Prohibition, and even more rumors about secret tunnels between Harry’s and a fraternity or two. Opened in 1919 as a family business, Harry’s has been in operation in this location for almost 100 years. You have to go at least once.

Horticulture Gardens, aka “Hort Park” to townies, is a huge, open park on the west side of campus, just past Purdue West. Hort Park is roughly 24 acres of gardens, woodland, and grassland devoted to horticultural studies, and makes for a pleasant, pretty, kind of romantic outing, with more than enough places for picnics, hiking, and picture-taking. It can also be reserved for weddings and whatnot if you’re so inclined.

“The Village,” aka Chauncey Hill Mall, aka Chauncey Hill, is the hub of the campus shopping district. This is also old “downtown West Lafayette” — the old police station, city hall, and public school were housed in this area. Once one of the grittier areas of campus, West Lafayette government is determined to clean this area up, build it up, and make it shiny. The Village houses some of the more interesting retail and eating establishments in West Lafayette, such as Von’s and Harry’s, but it is also home to Amused, a wonderful skateboarding and bohemian retail store run by one of the area’s most interesting entrepreneurs, Jake’s, a great campus sports bar with great bar food, Eclectic, a charming hair salon in a historic building that once housed the WL police station and city hall, and two wonderful coffee houses, Greyhouse and Vienna. The Village is also home to the only (current) campus groceries, which carry a wide array of Asian and American foods. The Village is about to undergo a huge facelift soon, with a major building on the corner of State Street and Northwestern being torn down to make room for new construction. Verdicts are pending.

There is quite a bit more on campus to see, including tons of wonderful public art, the beautiful Purdue grounds, and the excellent architecture all over campus. What must-sees did we miss?

How to Blog, For Real