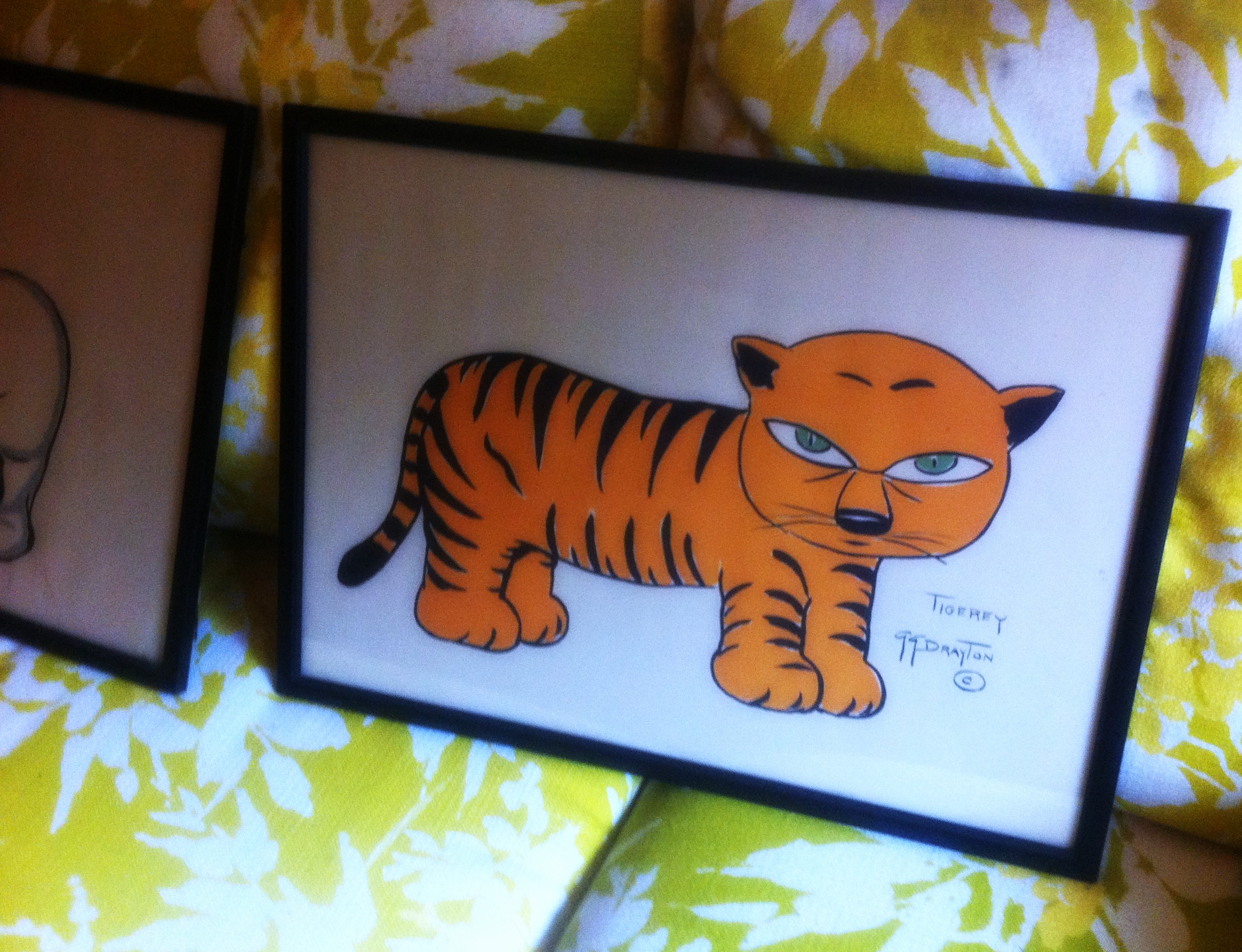 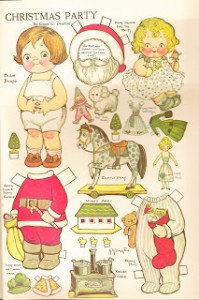 If you’re local to the Lafayette, Indiana, area and you’ve eaten at Arni’s, you are probably already familiar with G.G. Drayton’s art without realizing it. She was well-known in her time for creating the “Dolly Dingle” and “Kaptain Kiddo” characters, including an extremely popular line of paper dolls — which are featured in jumbo size in the back room of Arni’s toy room in Lafayette’s Market Square.

I didn’t know her name until recently, when I purchased a pair of watercolors that I knew were probably special, without actually knowing what they were. Once I got them — for a pittance — and got them into the car and into decent cell reception, I looked them up and just about wrecked my car. I had just picked up two original Grace Gebbie Drayton paintings, framed, in excellent antique condition. I was first attracted to the little orange cat, which looked like a mid-century, mod piece. When I saw the little bulldog, it read Victorian to me and I realized the pair was probably much older than I originally thought. 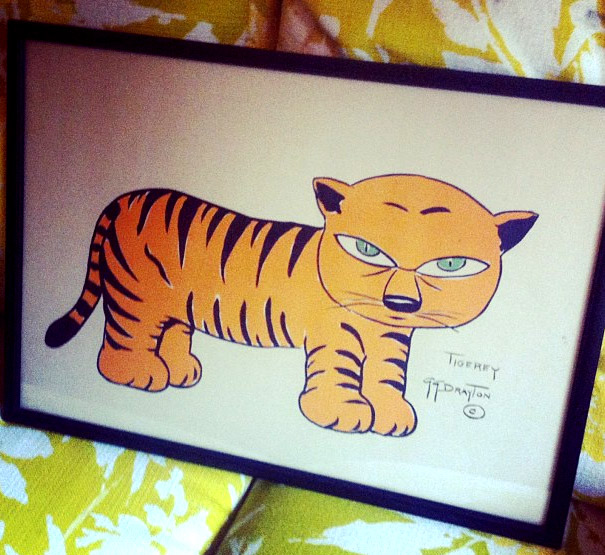 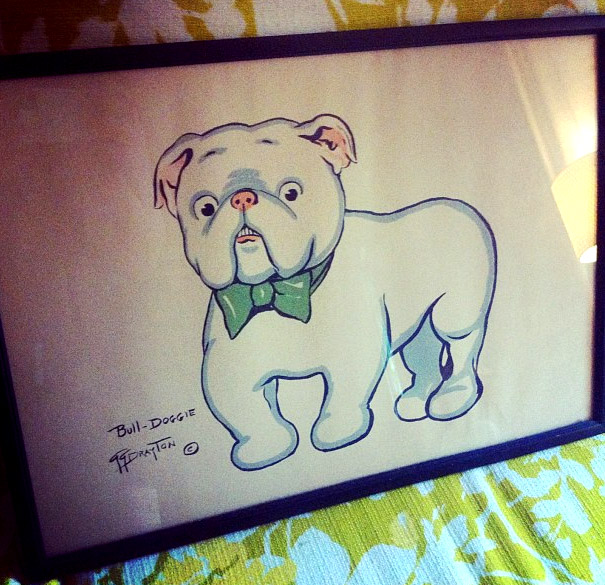 But wait a minute, who the heck is G.G. Drayton?

I did some research and found out she was a pretty cool person. An Edwardian clothes horse and the most famous of a family of lady artists, Grace Gebbie Wiederseim Drayton was an early comic book artist and entrepreneur whose work wasn’t often taken seriously because it was “overly-mannered” lady stuff. Regardless, she worked surrounded by a generation of young female artists who were fighting to change the perception of women in the male-dominated art world, not to mention the perception of women in general. Many of these folks were early suffragists and bohemians and early flappers. 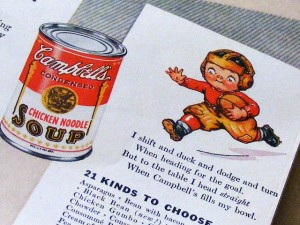 It’s ironic that she was often dismissed as an illustrator because she penned some of the most iconic advertising images of the early 20th century. Not only was she famous for her Dolly Dingle work, her work is the basis for the early Campbell’s Soup campaign. Those apple-cheeked babies with the stubby noses and fat little legs were her hallmark.

Drayton’s early work often focused on the lives of children, and she drew extremely stylized children and animals. When adults showed up in her drawings, it’s notable that they were far more elegant, stern, and refined than the chubby babies that dominated her imagination. Note below, the huge, round, stylized baby in comparison with the young, slim, beautiful mother in Victorian fashion. Her comics that appeared in fashion magazines were decked in Art Nouveau flourishes.

Her animals have the same round, tiny faces and round eyes as the babes. They are also just as naughty, guarded and precocious, frequently friends and equals to the children. In Drayton’s world, kids and animals were sweet, mischevous darlings, and the adults around them were stern, stiff-backed, and shallow. 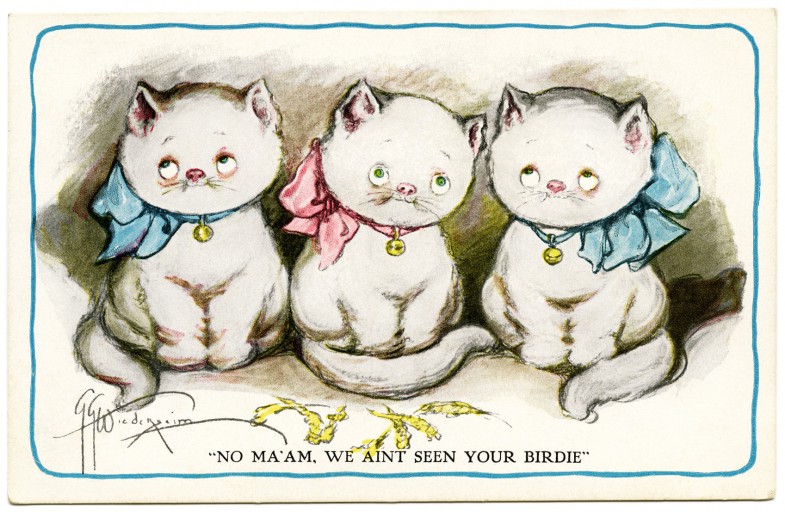 From what I can gather, Drayton was extremely prolific, drawing for Campbell’s, Dolly Dingle, collaborating with her sisters, and doing many of the one-off prints like the ones I purchased by chance this month. She drew ads and Valentines and postcards and also completed many fine art portraits of elegant women in fine Edwardian dress.

The paintings I picked up are deft little paintings, simple and practiced. Reportedly, in Drayton’s later life, she was an alcoholic who tried to capitalize on her early fame to keep herself financially afloat by painting these simple one-frame characters for children and collectors. Equally likely is that she was just a single old artist trying to make ends meet during the Great Depression.

For me, this was — as a Twitter pal put it — an Antiques Roadshow moment. Getting the back story is nearly as gratifying as making the score.

Riding Bikes with a Toddler