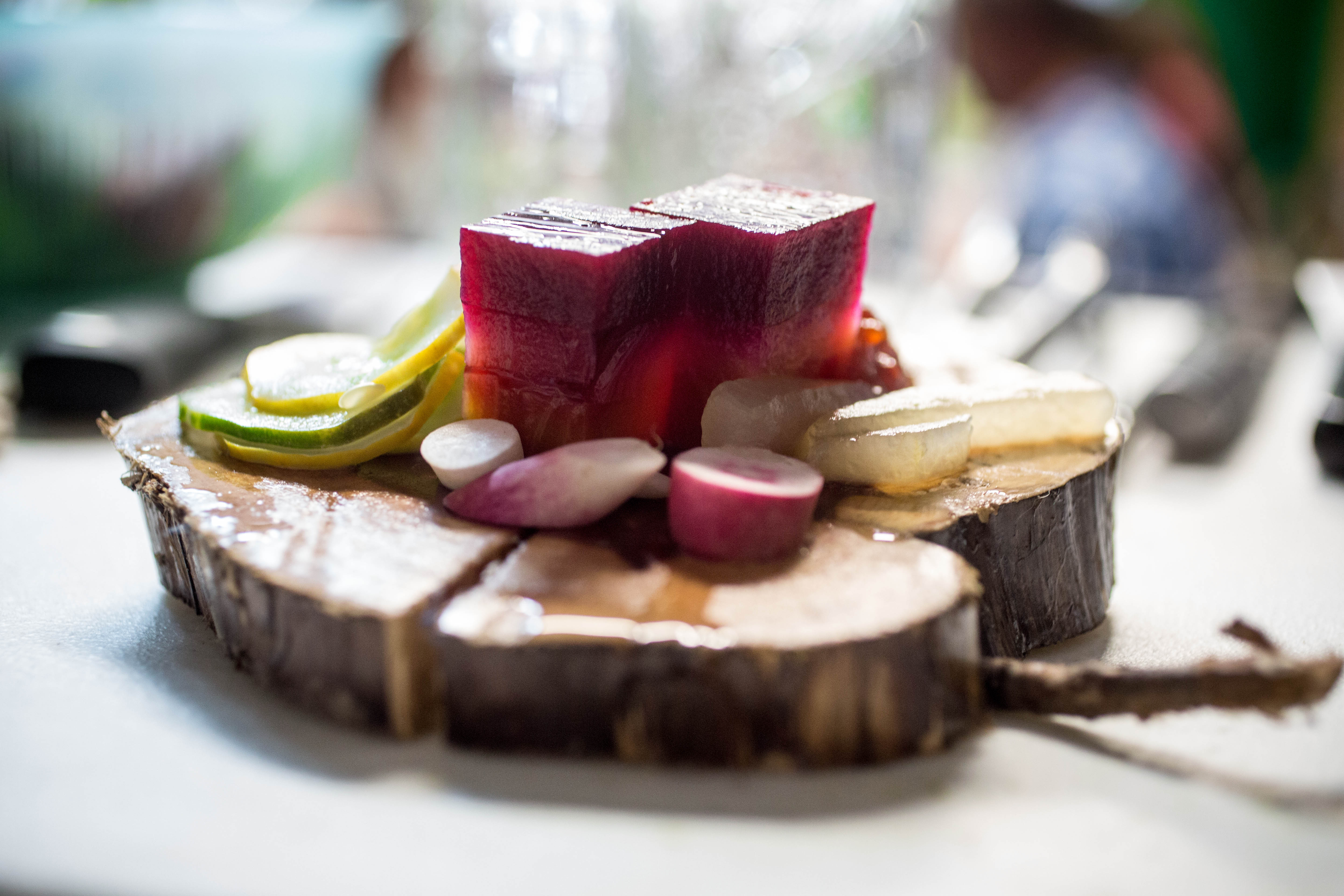 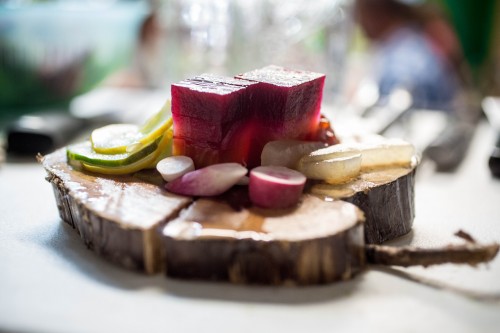 A review of Pop-Up Lafayette, the new, elusive, all local and organic “supper club” that is taking over the imaginations of area foodies.

“Our political philosophies are layer upon layer,” one chef said. Another said, “We just want to cook beautiful food in an interesting way.” Another said, “We want to cook food we are lifted by.” Another argued that the Midwest doesn’t have an identifiable food culture apart from catfish and tenderloin sandwiches. They made a point of emphasizing their purveyors for the event: Everything was purchased or made or grown locally. Mt. Gilboa Farms from Benton Co., farmer’s markets, local gardens of friends and family, a pork farm from Mulberry, locally sourced honeycomb, Trader’s Point creamery, Union City beer from Indianapolis, all fair trade and/or organic. You get the picture.

The problem is the lack of knowledge and confidence us regular non-chef folks have in the kitchen. They spoke, for example, of the end-of-farmers-market routine, where the participating farmers donate what produce they have left over to local food pantries. The food pantries find that while they are grateful to have all this fresh food, people aren’t always sure what to do with it.

As someone who likes good food and loves to eat, I wasn’t a strong cook until I got into the now discontinued “The Minimalist” columns from the NYTimes, where columnist Mark Bittman used a narrative recipe style to get you to take 3-6 fresh ingredients, add fat, heat, acid, and seasoning, and end up with a great, fresh meal. I kept going back to the squash salad course in my mind. This deceptively simple dish was quite good, perfect on a hot and humid summer day. I’d never eaten raw squash before. When I asked for a quick recipe to put on the site, they shrugged and discouraged it.

What Pop-up Lafayette would rather we do is get motivated, do dinner with friends, and learn how to cook from one another. Another alternative, one suggested, is to get into City Foods in downtown Lafayette for the regular — FREE — cooking classes they offer there as part of their mission. The other thing is to figure out how to repurpose leftovers, so, for example, how to roast a chicken, and then how to reuse the leftovers on days two and three.

Why all the secrecy? We have a serious red tape problem in town for new restaurants and food concepts, thanks to the ever fragmented laws regulating Lafayette, West Lafayette, and Purdue. Talk to any local cook about the combative relationship between the health department and the restaurateur.

We discuss nonsense food codes with Pop-up Lafayette in the linked article as well.

I’ve been talking about the “pop-up” concept with a lot of artists and foodies around town, and these are the first folks to make it happen. On the Think Lafayette Facebook page, we post a lot of pop-up art and parks and food installations in cities around the world. None of these are municipally sanctioned, and they are organically grown from the creativity of the community around them. I’d like to see more of this in Lafayette, and less “public” art with staged press releases so that local government can take the artist’s credit. As Dave Bangert said, city government is at its best when taking a backseat and letting the citizenry shine. Indeed, for artisans too.

Read the rest at Think Lafayette.