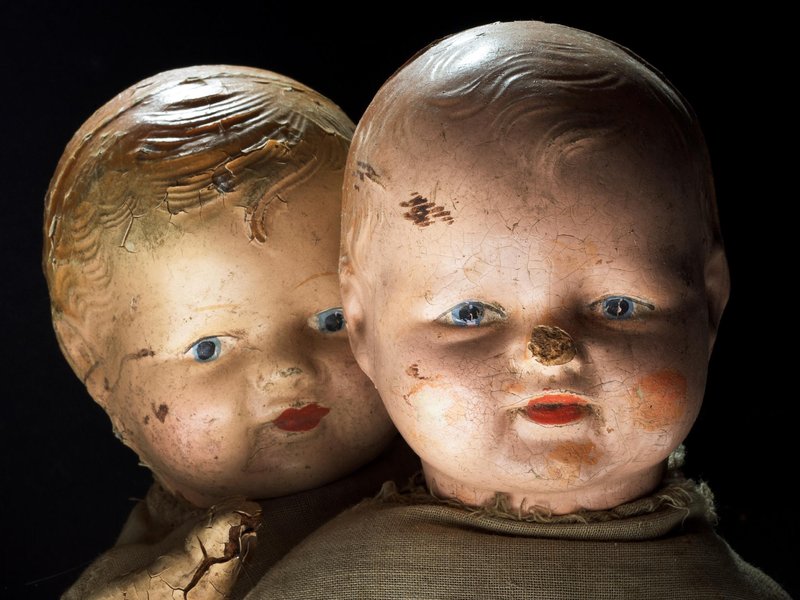 A History of Creepy Dolls 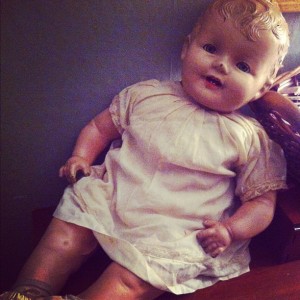 When I first started going to auctions, I accidentally bid on and won a creepy doll. At an estate auction, I didn’t like the cut of some lady’s jib, and bid her up on a random item to be a jerk and give her a hard time. This is a common, if ill-advised, auction practice — I learned it from my parents.

Karma got me for showing off. I won it.

My win was an early 20th c. composition “mama” doll with a white gown and white leather shoes, whose head had been damaged by moisture and peeled away at the top, exposing a dense white skull of “composition,” a molded glue and sawdust mixture. She dated about 1910-1940. Her eyes opened and closed and her cloth body was stuffed to be about the size and weight of a 10-12 month old human child. These were called “mama” dolls because they had a voice box inside that said “mama” when you sat the baby up or laid her down. My baby no longer said “mama.”

She was creepy as all get out. She had flat eyes, a peeling head, and a weird smile. She was roughly the size and weight of an actual baby. Nobody wanted anything to do with her. I put her in an antique store but nobody would buy it. I tried to sell her online and got no interest at all. Eventually I stuck her in a closet waiting for an opportunity to unload this baby doll on someone else.

Posting about this weird mistake on social media, my friends and family were delighted with my bad luck and began to associate me with creepy dolls of all kinds. Folks sent me every link, photo, story, or event that had to do somehow with creepy dolls. It turns out there is a lot of them. There is even a doll museum in my hometown I didn’t know about prior, a two-story Victorian row house complete with a creepy curator and chock full of automatons from floor to ceiling. People are disappointed to find out that I not only don’t collect creepy dolls, but I’m also not into them apart from teasing my friends and family.

Today, someone sent me this amazing article by The Smithsonian on the history and culture associated with Western dolls and an exploration of what we mean when we talk about “creepiness”:

Research into why we think things are creepy and what potential use that might have is somewhat limited, but it does exist (“creepy”, in the modern sense of the word, has been around since the middle of the 19th century; its first appearance in The New York Times was in an 1877 reference to a story about a ghost). In 2013, Frank McAndrew, a psychologist at Knox College in Illinois, and Sara Koehnke, a graduate student, put out a small paper on their working hypothesis about what “creepiness” means; the paper was based on the results of a survey of more than 1,300 people investigating what “creeped” them out (collecting dolls was named as one of the creepiest hobbies).

Creepiness, McAndrew says, comes down to uncertainty. “You’re getting mixed messages. If something is clearly frightening, you scream, you run away. If something is disgusting, you know how to act,” he explains. “But if something is creepy… it might be dangerous but you’re not sure it is… there’s an ambivalence.” If someone is acting outside of accepted social norms – standing too close, or staring, say – we become suspicious of their intentions. But in the absence of real evidence of a threat, we wait and in the meantime, call them creepy. The upshot, McAndrew says, is that being in a state of “creeped out” makes you “hyper-vigilant”. “It really focuses your attention and helps you process any relevant information to help you decide whether there is something to be afraid of or not. I really think creepiness is where we respond in situations where we don’t know have enough information to respond, but we have enough to put us on our guard.”

Finally, after three years of scaring myself by finding the creepy baby in closet after closet (“Did I move this, or…?”), I pawned it off on someone else. A local artist who didn’t seem too horrified by the idea found her on his doorstep. 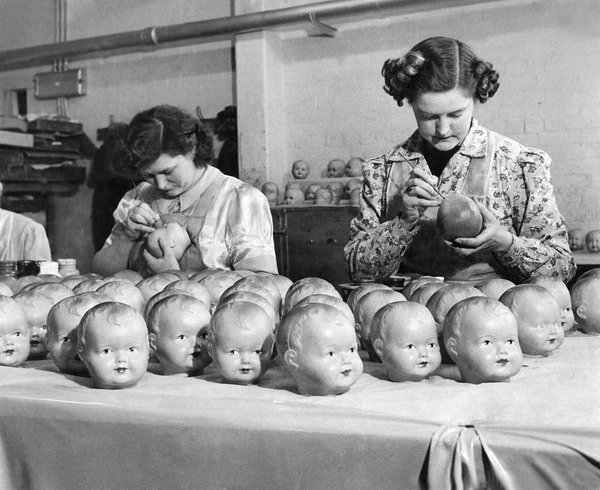 How to Identify Stanhope Jewelry