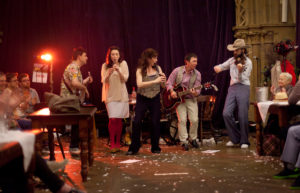 The National Theatre of Scotland is delighted to announce a number of dates for the international tour of The Strange Undoing of Prudencia Hart, following on from its phenomenal success and critical acclaim, both on tour and at the 2011 Edinburgh Festival Fringe. The production is touring Scotland, England and internationally in 2012 and 2013.
From 20 June the production is visiting US festivals and venues in Connecticut, North Carolina, Chicago, Massachusetts, Ohio, Purdue, Washington DC, Michigan, Texas and California. The production will also be visiting Vancouver, Canada, Australia, and New Zealand, and for the first time the National Theatre of Scotland will be visiting Brazil. In keeping with the site-specific origins of the show, the production is being staged in a tavern, a brewery, and community spaces and studios with bars built in.

The Strange Undoing of Prudencia Hart is undertaking a likely 18 date world tour. This is the longest international tour for the Company to date, spanning three continents. The tour has been made possible in part by the support of the Scottish Government’s International Touring Fund.

The Strange Undoing of Prudencia Hart originally toured Scotland in February 2011 subsequently playing at Latitude Festival, Ãran MÃ³r, Glasgow, and the Edinburgh Festival Fringe in August 2011. The production has won three awards, a Critics Award for Theatre for Best Music and Sound, a Herald Angel and an Argus Angel (Brighton Festival 2012)