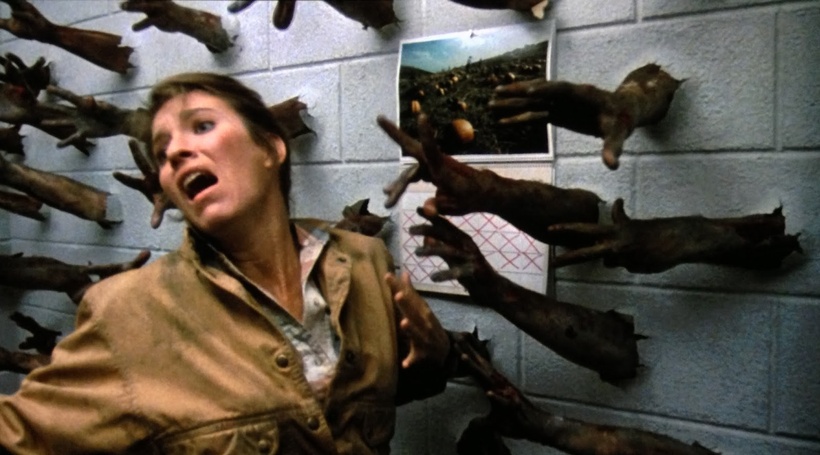 Synopsis: Cannibalistic zombies have overrun the entire world. While the living dead regroup above, the remaining humans sweat it out below in a Florida missile silo.

Why feminists will watch: Ultimately, the bad guys in Day of the Dead are the American military. Bloop.

It’s hard to overstate Romero’s role in horror. Known as “godfather of the dead” and “father of the modern zombie,” Romero’s genius is weaving cultural commentary about everything from racism to respectability politics, to the social misuse of science, and even to the dangers of capitalism throughout his zombie films. Horror and zombie buffs will find my selection of this movie controversial as it’s one of the lesser “Deads” – but it was also Romero’s favorite of the original three, and I’m partial to the critique of the military-industrial state.

(I’m also partial to the 2004 Dawn of the Dead remake, so that comes later in this series.)

Is it gory? Yes. The gore is super corny though. Don’t let it deter you.

If the yelling and gore bother you, take this time to take a deep dive into the classic horror argument: “Which is scarier? Fast zombies or slow zombies?“

Is it problematic? Yep. George Romero is known for weaving social commentary into lowbrow genre films, and has talked at length about how he chose to cast and write underrepresented minorities in his films over time. There is a lot to unpack there, and while some of it doesn’t age well it’s vital to understanding the genre as a whole.