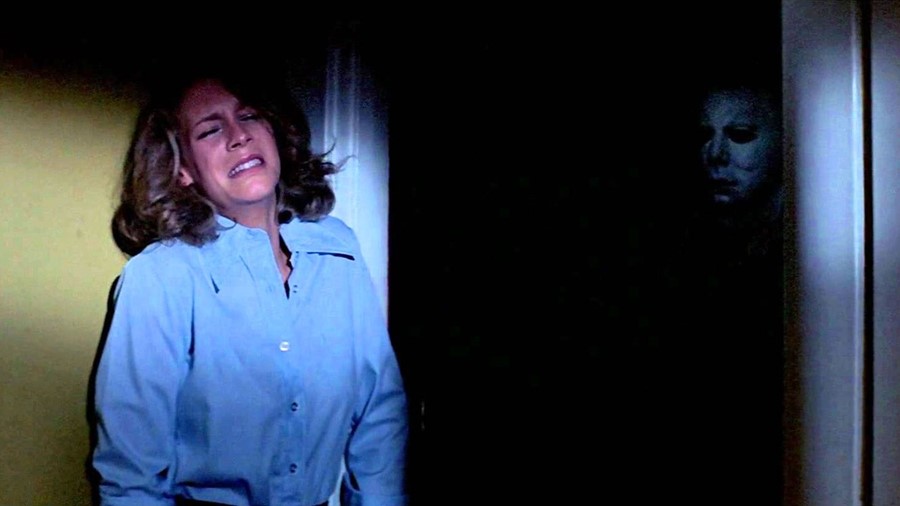 Synopsis: A murderer institutionalized since childhood for the murder of his sister escapes and stalks a bookish teenage girl and her friends while his doctor chases him through the streets of suburbia.

Why feminists will watch: Halloween is the template for many teen horror movies that followed. The first of the famous franchise (eleven and counting) was created by John Carpenter, who treated this thin, pulpy script with an auteur’s touch. As a result of his artistry it features tons of fantastic cinematography with tightly controlled shots that build tension until you’re ready to crawl out of your own skin. Young, then-unknown Jamie Lee Curtis stars as the original final girl Laurie Strode, and embodies white suburban anxieties about sex and morality. Only the “good girls” like smart, chaste Laurie prevail.

This infamous scene where Laurie is stalked by the villain as she walks home from school will stay with you for a long time, both because of the suspense and because of the masterful use of the camera and music to build that suspense. What horror lurks in each car, behind every curtain, in the halls of every school, inside every dad, brother, boyfriend, and mean girl?

The banal evils of suburbia are explored again and again in the horror genre (seen most recently in the work of Jordan Peele, who brings new life to the genre). What makes “Halloween” special is the attention to composition, the use of timing, long shots, foregrounds and backgrounds that create suspense and terror in you, the audience, who viscerally experience the danger in these pastoral scenes. Everyone and everything here is ordinary, just like viewers at home, except for the killer waiting in the bushes.

Like other genre-defining movies in this series, the audience is asked to identify with a resourceful young woman who is both victim and hero, a reflection of contradictory, complicated, changing and fluid gender roles, which also determines who is good and who is bad, and determines who lives and dies and in what order.

(Note: Rob Zombie casually threw a rape scene into his 2007 remake, so stick to the original.)

Is it gory? Yes, but forty-some years later, the gore looks pretty corny. Don’t let it deter you from this classic.

Is it problematic? Absolutely. When you’re done, disassemble these tropes like a serial killer dissembles a body.